Malawi is a landlocked country in South East Africa and was formally known as Nyasaland during the British Empire days.

It is bordered by Zambia, Tanzania and Mozambique.

The rural environment where the school is located has a conurbation of circa 100,000 people.

The village and surrounding environment are controlled by a chief and village head men, with the overall Chief Chiluzi being responsible for approximately 7000 families.

The economy within the village is entirely based on subsistence farming with 2 main crops of maize and Irish potatoes.

We attracted teachers to the school by the provision of benefits, for example a bicycle.  Teachers who don’t live in the village often have long journeys to and from the school.  We currently have 17 teacher’s houses on the campus.

Malawi is among the world’s least developed countries.  The economy is heavily based on agriculture with 85% of the population living in rural areas.

The government faces significant challenges around building the economy, improving education, healthcare and environmental protection.  It depends heavily on outside aid to meet development needs.  The country has a low life expectancy and high infant mortality.  There is a high prevalence of HIV/AIDS.  The country is also nicknamed ‘The Warm Heart of Africa’.

Over the last 10 years we have established adult literacy classes on four afternoons per week with almost 50 parents attending. English conversation classes are also available to members of the community and our older pupils can also attend.

We have engaged significantly with the community through the construct of committees such as PTA, School Council and our relationship with the Chief and Village Heads is extremely important in a number of ways such as to request:-

Within the campus there is a church and whilst we have no direct responsibilities for the upkeep of the church, it is an important Community asset and we have greatly improved the fabric of the building.

6000 trees have been planted since September 2012.  It is our intention to plant a further 1000 trees per year. This is an environmental initiative as the Community burn wood for the rocket stoves in the two Mary’s Meals kitchens.

It is our intention to plant a further 1500 trees this year.  It is our understanding that, at the current rate of deforestation, Malawi will have a serious crisis around wood from trees by 2030. 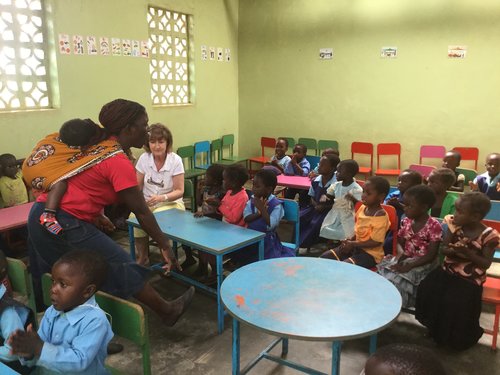